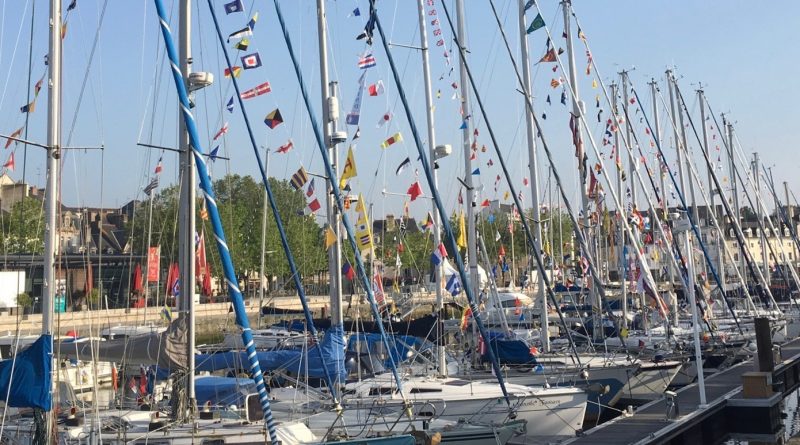 Ten yachts and their crews from Hill Head, Portchester, Fareham and Warsash Sailing Clubs joined in a week of fellowship, good victuals and – oh yes – ‘la canicule’. The passages out to Vannes were varied: some left the Solent early allowing time to linger in favourite ports and anchorages, others delayed and made swifter progress, whilst two made a short passage from their ‘home’ berths in southern Brittany. We set up a (very successful) ‘WhatsApp’ Group to enable crews to keep in touch en route to Crouesty Marina, close to the entrance to the Golf de Morbihan, where we were to rendezvous with our French hosts.

The first event of our programme was the evening welcome, hosted by Monique Moutaud, President of the Vannes – Fareham Voile, and fellow members, held at the Crouesty Sailing Club. All the visitors were presented with a commemorative document case filled with ‘goodies’. The ambience was as warm as the weather, assisted by a fine rum punch apéro and wine-tasting.

The next day our passage through the Golfe to Vannes, dressed overall, in company with some of our French hosts, was made in steady rain. Our signal flags and bunting sagged a little, but they perked up, as did our spirits, when we came up the river and into Vannes’ harbour to be greeted by the sound of traditional Breton pipes. The day finished with a reception and dinner at L’Espace Montcalm, once a Catholic seminary, to the  accompaniment of an excellent Blue Swing Jazz Band.

The fine weather returned the following day, and we were off to Arradon to be taken in high-speed boats to L’Isle Ilur, a nature reserve in the Golfe de Morbihan.  Here we were greeted by Gwen, one of the island’s resident custodians, who gave us an introductory talk, before leading us to join our hosts for the day, L’Association de Plaisanciers de Port de Vannes (APPV), for a magnificent picnic lunch in welcome shade.  In the afternoon Gwen took us on a guided walk to show us more of the history and flora and fauna of the Island, before we returned to Arradon bearing yet more gifts from our hosts, and the remains of the picnic, which the Fareham crews were still enjoying 2 days later!

A more formal occasion awaited us on the Wednesday morning with a rendezvous at the  Hôtel de Ville  (Town Hall), where we and our French hosts were received by one of Vannes’ deputy mayors. Speeches were exchanged and conversation flowed as we enjoyed canapés and kir. In the afternoon, we all piled on to the Petit Train to see Vannes’ splendid buildings, including the fine  Cathedral which some of us later toured under the expert eye of a local guide. In the evening our hosts took us to an oyster farm on the Golfe for a tour followed by a seafood supper – very unusually, the wine served came from New Zealand! There followed hearty singing as we basked in the setting sun.

A morning of tuning our skills at Godille – rowing over the stern of a dinghy – was scheduled for the next day. A welcome pursuit, as  La Canicule – very hot air from the South – had reached Vannes. Amazingly, no one fell-in the harbour despite the temptation of the cool water in the rising temperatures!  In the afternoon, a game of boule was soon abandoned as our French hosts produced a keg of beer and a cooler! The heat eased a little in the evening as we dined once again at Espace Montcalm – this time en plein air, where we were treated to a display of Breton dancing, in which participation was not to be missed whatever the temperature!

The farewell dinner was held at Hotel Le Roof on the Conleau Peninsular in glorious weather. During the closing days of our stay in Vannes the harbour side was dominated by  a vibrant festival of competitive running including the 177km Ultra Marin Rade du Golfe.  We enjoyed a ‘bird’s eye’ view of its opening stage as the runners passed immediately below the hotel garden whilst we sipped our apéritifs!  After another fine meal to the accompaniment of Blue Swing, speeches were made, gifts were exchanged (including John Herbert’s “Twinning Plate”), songs sung and fond farewells taken, but not before an invitation was extended to the French sailors to sail to Fareham in 2021.

Planning for the return French visit starts now! If you’d like to be involved, please get in touch at jandgpickburn@gmail.com.