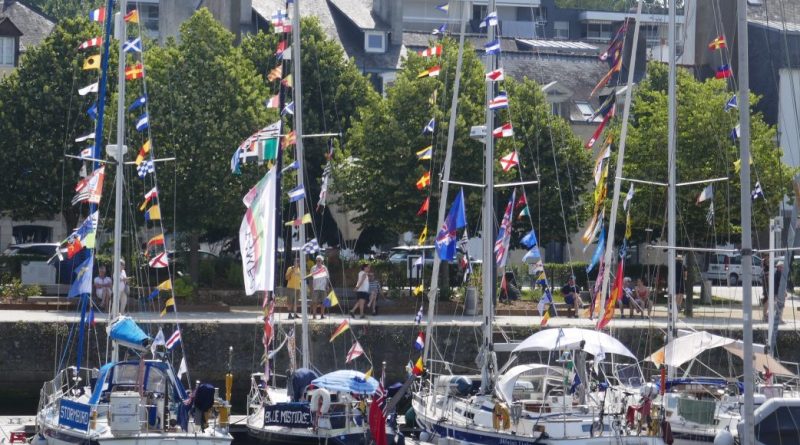 Ten yachts from sailing clubs of Fareham made the passage to Vannes to join the 10th Fareham-Vannes Twinning Cruise – 4 from Warsash, 2 from Hill Head, 2 from Fareham and 2 from Portchester. After mixed weather on the outbound trip, all arrived safely by 23 June at Crouesty Marina, where we were warmly greeted by our French hosts.

The next morning, dressed overall, but under grey  skies and heavy rain showers, the fleet paraded through the Golfe de Morbihan into Vannes, where we were greeted by the sound of Breton bagpipes. The six day visit coincided with a “canicule” of very hot (35 deg C) air from N Africa, making for a couple of uncomfortable nights onboard.

Our French hosts arranged a wide variety of outings and fine meals for our enjoyment, including a reception at the Hotel de Ville where we were greeted by one of the town’s Deputy Mayors. At the weekend the harbour hosted the Raid du Golfe, a festival of running including the 177km Ultra Marin race round the Golfe de Morbihan. It made a fun, if noisy, backdrop to the final days of our stay in Vannes.

The fleet has now left Vannes and the yachts are making their ways variously onward or homeward; we send this update from a peaceful mooring off the Île au Moins . . .